In recent years an ongoing debate has brewed over advertisers and fashion magazines using photographs, particularly photographs of women, that have seemingly been altered, or "retouched," by airbrushing and photo editing software such as Photoshop. The latest such image to cause an uproar is one featured in a new Ralph Lauren advertisement that shows a model, Filippa Hamilton, so emaciated that her waist actually appears to be smaller than her head (see pic on top left/pic on bottom right is another picture of Filippa Hamilton).

On September 29th, Boing Boing's Xeni Jardin posted the ad, which originally appeared on a blog dedicated to pointing out

suspected retouched images called Photoshop Disasters, with the comment, "Dude, her head's bigger than her pelvis." Ralph Lauren responded by filing a Digital Millennium Copyright Act (DMCA) complaint against Boing Boing and Photoshop Disasters, claiming that their use of the image was a copyright infringement that fell outside of the Fair Use laws which allow the media to reproduce creative content for the purposes of commentary and criticism.

The Internet service provider hosting Photoshop Disasters (Google Blogspot) deleted the post containing the image, while Boing Boing's (Canada's Priority Colo.) did not. In response, Boing Boing editor Cory Doctorow issued a stern warning to Ralph Lauren yesterday on the website, saying that the company's attempt to silence their criticism has only inspired them to step up their efforts in the future:

"Copyright law doesn't give you the right to threaten your critics for pointing out the problems with your offerings. You should know better. And every time you threaten to sue us over stuff like this, we will:

a) Reproduce the original criticism, making damned sure that all our readers get a good, long look at it, and;

b) Publish your spurious legal threat along with copious mockery, so that it becomes highly ranked in search engines where other people you threaten can find it and take heart; and

c) Offer nourishing soup and sandwiches to your models."

The U.S. isn't the only place where advertisers are feeling the public backlash over retouching claims. Overseas, a recent Olay ad featuring a virtually wrinkle-free 59-year-old Twiggy caused such an uproar in the UK that the British Parliament recently proposed outlawing retouching in advertisements aimed at teenagers. The movement was initiated by the nation's Liberal Democrats, whose leader on the issue, Jo Swinson, said:

"Today's unrealistic idea of what is beautiful means that young girls are under more pressure now than they were even five years ago. Airbrushing means that adverts contain completely unattainable images that no one can live up to in real life. We need to help protect children from these pressures and we need to make a start by banning airbrushing in adverts aimed at them. The focus on women's appearance has got out of hand - no one really has perfect skin, perfect hair and a perfect figure, but women and young girls increasingly feel that nothing less than thin and perfect will do."

In the U.S., many retouched images featuring celebrities have been the subject of recent scorn, including a L'Oreal ad that lightened Beyonce's skin, an image of Jessica Alba airbrushed to feature a slimmer waist in a Campari ad, and an ad for London Fog featuring Gisele Bunchen in which her "baby bump" was removed.

In response to the growing concern over retouching, a website called About-Face, whose stated mission is to arm "women and girls with tools to understand and resist harmful media messages that affect their self-esteem and body image," has sprung up. The site features a "Gallery of Offenders" as well as a "Gallery of Winners" to highlight who the site's editors feel are the advertising industry's best and worst in regards to improving and harming the image of the modern woman. Site visitors can also contribute money to help offset its operating costs as well as expand programs designed to educate young women on beauty and self-image.

Another website to garner attention for its dedication to exposing photo retouching offenses is Jezebel.com. Speaking on the subject of retouching, Jezebel editor-in-chief Anna Holmes told Yahoo!, "I don't see any point in retouching anymore ... The cat's out of the bag." She added, "I think Americans in particular are sick of having the wool pulled over their eyes ... even if it's regarding fashion models and actresses. The more they do this sort of retouching -- and then try to justify it, as the editor of SELF magazine recently did -- the less anyone believes anything else they have to say, or show. They are, in a sense, digging their own (shallow) graves."

Whether or not Holmes is right about the digging of "shallow graves" remains to be seen, but companies like Ralph Lauren certainly don't appear to be helping their cause by attempting to silence their critics, as doing so has only increased the amount of negative attention to their already controversial ad.

This is REAL Modeling

Posted by EnVisage Model Group at 12:57 PM No comments:

Again, this years Atlanta's Haute.lanta Fashion Week was a success. To get in on the fun next year, here are the requirements:

Posted by EnVisage Model Group at 1:32 PM No comments: 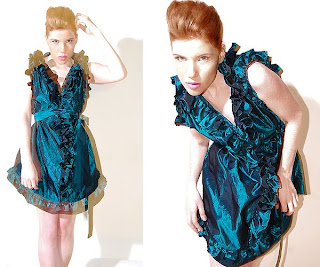 How many can say they've had the opportunity to get inside the mind of a freaking fashion photography genius? Well now is your chance. Read on to get the goods that ONLY EMG can provide you.

2) Thinking back to the days of the "Supermodel", who would you be honored to shoot? I would love to work with Grace Jones, Iman, Beverly Johnson, Naomi Campbell,Or Alek Wek (although she is a current model). I love their complexion, their personalities, and business savvy.

3) What inspired you to get behind the camera? Travel. A cross-country family vacation from California To New York and back is where I got my training. I haven't put down the camera since or stopped dreaming of shooting in other places in the world.

4) What is your greatest achievement? My daughter...and being able to do what I love to do - take pictures!

6) If you could have your work featured in any fashion magazine, which one would you die for to be included in? Lol..I am not gonna ever die if I don't get into some magazine! Although, I would like to shoot for Time Magazine, Vogue (of course), Surface, French, Sports Illustrated Swimsuits, And Zink.

7) So we heard you are writing a book...can we get the inside scoop? The book is a collection of sepia images I take while traveling. It's titled "The Untimely Pursuits Of Pleasure", its a collection of images depicting things people do when they should be doing more important things or situations that seem ironic on the surface....like calling in sick to work and then going to 6 Flags, or a "cougar" couple: the older man with the younger woman. I do this sometimes; when I should be editing images or email invoices, I just ignore it all and go shoot for hours and hours. One time I had a 3 hour layover in Washington DC. I had never been there before, so I left the airport, ran around DC taking as many pictures as I could..that part of the book is called 178 Minutes In Washington DC. Those moments make the best pictures! I like the idea of all the images being in sepia because its a classic quality.

8) Do you think that photographers fall into a stereotype? If so, why? Photographers all have the same skill set and general passion; some people may try to stereotype us because of that. What makes us different is how we see the world and that makes us personally satisfied with an image at the end of the day. Each photographer has his/her own unique "process".

9) Every photographer has their signature...what mark do you leave on your photos? I don't tag or mark my images. My images vary greatly. I don't have a signature or style other than the images being compelling...I sign my name different every time.

10) If you had barbed wire, an unlimited supply of cotton balls, a bald African model with a statuesque stance about her, and a fluffy, cotton red blanket with tons of matching overstuffed red pillows...how would you shoot her? The wire would be leading from my camera like streams of light, the cotton balls would be placed on colorful lollipop sticks in a field, the model would be tastefully nude throwing imaginary bolts of light back at the camera leaping,smirking, gracefully dueling with the camera, wearing the red blanket as a cape, at dusk with the sun behind her. It would be in Black & White..love the classics!

11) So if I wanted to check out you work...where can I go? www.daustinphotography.com

If you truly aspire to be a fashion icon, we suggest you check out the infamous D. Austin!

Posted by EnVisage Model Group at 2:47 PM No comments: If you missed the one in January then this will surely be like Christmas in June! Once again it's time for the one and only MAC Friends and Family Sale! This time MAC will be having their Friends & Family Sale for three days only from June 16th through June 18th.

To get your MAC fix, enter promotional code SUMO at checkout and you'll get a whopping 25% off your entire purchase (excluding Viva Glam and gift cards) valid on in-stock merchandise at MACCosmetics.com and MACCosmetics.ca Yes that’s right, this 25% OFF SUMO Sale offer is only available through the U.S. and Canadian MAC Cosmetics websites (not valid at MAC stores and MAC Department Store locations).

MAC shipping charges start at $5.00 and increase with the value of your order. However, you can get FREE Shipping when you purchase $60 or more but if your order is less than $60 then I suggest you try coupon code LASH69 for free shipping. You can also pay $5 more for 2nd day delivery or $10 for overnight delivery. Happy shopping!
Posted by EnVisage Model Group at 9:18 AM No comments:

Posted by EnVisage Model Group at 12:31 PM No comments:

Posted by EnVisage Model Group at 11:02 AM No comments: